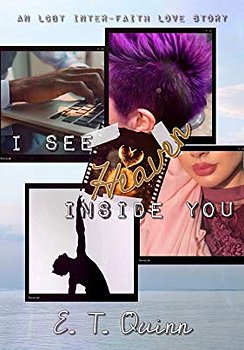 Submissions
We are currently accepting submissions for our June 2020 issue.

I See Heaven Inside You by E.T. Quinn

"Hi! Sorry to bother you; I know you probably get asked this a lot, but do you ever struggle with your faith because of your sexuality? – Anon."

Chai Gamal is a Muslim journalism student who works for a freelance newspaper, and he lives in San Francisco. He's also pansexual and that's not okay. Not according to his father, or sister, or friend - they say that Allah will never accept him, but they're wrong and Darius knows it. It's just he doesn't know how to show them that.

Leo Smith starts talking to a journalist on Tumblr after seeing an odd post, and does his best to comfort them. He is an English major at SF State, and he's happy in his relationship, even if his father dislikes it.

Brandon Rahal is a freelance ballerina (yes, really) and is trying to get his big break, but struggles because of his appearance and past. Through it all, he can always count on his boyfriend and girlfriend.

Samara López is a transgender Muslim gym rat. She runs classes at her local gym for younger kids, and goes to Friday prayer every week. Sure, things can be tough as a Muslima in San Fran, but let's be real, others have it worse, right? None of them planned for their lives to change so drastically, but maybe that wasn't a bad thing.